Indonesia has a wide variety of natural resources including the islands of paradise, one of which is Pasumpahan.

West Sumatra has a wealth of natural and cultural community that is distinctive and unique. Area stretching from the west coast to the central Sumatran presents a unique experience and has made it as one of the best and favorites tourist destinations in Indonesia.

Padang city became the most important city in western Sumatra, as well as the administrative center of the province. In addition to the business and administrative center of the city, the city of Padang on the west coast of Sumatra Island presents a coastline 84 kilometers with 19 beautiful islands to be visited in the vicinities. Padang could be an attractive haven for tourists before exploring other places, due to a number of tourist sites in the vicinity, one of which is Pasumpahan.

Pasumpahan is an island in the waters of the sub-district Bungus, Kabung Bay, Padang, West Sumatra, Indonesia. The claims of the beauty of the sea make this island became known to local and international tourists.

Pasumpahan located approximately 200 meters from the island Sikuai. This island has the attraction of white sand beach with coral reefs that are still awake. In addition, the island became a shelter or gathering of fishermen. On the beach we could see a lot of activity here that fishermen were catching fish. 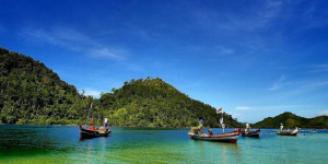 Pasumpahan is a beautiful island that is easily accessible from the city of Padang. The island is believed to citizens about an incarnation of Malin Kundang who was sworn in (condemned) mother into stone (Malin Kundang story). Residents believe that Malin Kundang was cursed into stone on the island because it is associated the name ‘pasumpahan’.

Pasumpahan has an area of ​​5 acres has white sand with clear sea water. Interestingly, the surface of this island as divided into three colors (clear, green and blue). The depth to the ocean is the cause of the color difference. 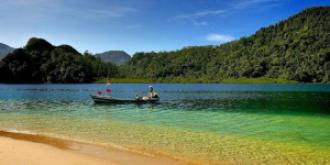 Tourism potential underwater marine west coast tourist area of ​​the city of Padang is in the form of coral reef ecosystem that is almost contained in each island, including Gosong Island. Aside from coral reefs, various species of reef fish or ornamental fish are also very interesting to be enjoyed by tourists. 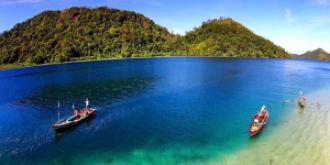 In addition to the tropical island with white sand, the island has the main attraction are the beautiful underwater ecosystems. Coral reefs are sufficient to be enjoyed by diving or snorkeling. There are many different types of coral fish and the main ones are about 21 species of kepe-kepe fish dominated by Chaetodon trifascialis.

If you want to shop around to find the point of diving, you can visit the Gosong Island, Ular Island, Sirandah Island and Pandan Island.

Things to do in Padang

Pasumpahan located on the west coast of Padang. Its location on the west Small Setan Island or 200 meters from the coast of the island Sikuai Bungus District of Kabung Bay, Padang.

If you want to go directly to Pasumpahan of Padang, it can also rent a fishing boat from the Port of Bayur bay.

Pasumpahan fairly remote, in addition to carrying the equipment tent, bring food and water to taste. Do not forget to take medicines, mosquito repellent and sun block.

Some parts of the dock here less manicured and not very sturdy, but a gathering place for fish. If you want to down need to be careful.

If you do dive around the island is the great coral reefs to be enjoyed at a depth of 10 meters. In this area, sometimes there is the rehabilitation of coral reefs and coral transplantation to create a metal structure placed on the seabed.

This entry was posted in Vacation Places and tagged Padang, Paradise Island, Pasumpahan Island, traveling to indonesia. Bookmark the permalink.