Togean Islands are part of the territory of Tojo Una-Una, Central Sulawesi Province, Indonesia. Togean Islands extends along 90 km. The archipelago consists of 6 islands and the islands are smaller, which accounted for 60 of the island. The islands are located in the Gulf of Tomini and save natural resources which was amazing. In this archipelago there are hundreds of species of coral, fish, mollusks, and some types of animals that already scarce. In 2004 the central government set Togean as a national park, a national park with two areas of ecosystems such as oceans covering 292,000 hectares and 70,000 hectares of land. Remote location and away from the bustle of life became the attraction that lures lovers of natural beauty and diversity of marine life. 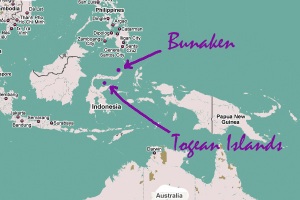 Togean is a very popular tourist destination for tourists from abroad. Natural panorama Togean Islands are truly exotic. In Togean you can see the mangrove forest and the expanse of ‘lamun patai’ or ‘Nambo’ (seagrass beds) namely the broad beach grass and a source of food of marine mammals such as dugongs. Several species of endangered sea turtles are also here as the green turtle (Chelonia mygas) and hawksbill (Eretmochelys imbriocata).

In Togean there are about 33 species of mangrove that consists of 19 true mangrove species (true mangroves) and 14 species of mangrove followup (mangrove associates). All 33 species of mangrove are grouped in 26 genera and 21 familia. In a stunning underwater you can see pilot whales, giant clams (Tridacna gigas), and trochus (Trochus niloticus), manta rays, gray reef sharks, and big eye trevally fish, and of course the colorful coral. Variety of coral reefs there are four types, namely: the coral barrier (barrier reef), coral tompok (patch reef), reef edge (fringing reef), and coral ring (atoll). There are also 35 species of butterfly fish (Chaetodontidae) who live in the vicinity as well be an indicator that the reefs are so healthy and natural. In the area of deeper water you can find more about 262 species of coral, 596 species of fish, and 555 species of molluscs. 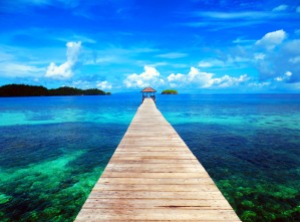 Here, tourists can perform a variety of tourist activities, such as fishing, diving, swimming, sailing, or sunbathing on the white sand that lie in almost the entire coast. Forests with tangkasi and wild boar in it, the fishermen with all its activities, also houses the Bajo is another beauty presented by Togean Islands.

Tangkasi (Tarsius Spectrum) is a small-bodied animal, only the size of a rat. Tangkasi is a nocturnal animal. He slept in the daytime, and at night he hunts: insects. Which makes these animals so special is tangkasi can only be found in Sulawesi. 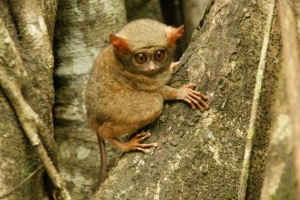 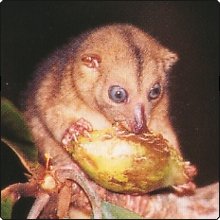 In the main residential areas on the island Togean, there Katupat village which has a beautiful beach or you can go into the forest to do trekking.

Meanwhile, Wakai, a district town, there is a port for embarkation to the island Kadidiri which is a tourist attraction in the islands Togean.

Kadidiri Island is the most popular island, the beaches are very beautiful with perfect snorkeling and diving locations. There are many cheap accommodations and on the west coast there is a row of stone cliff which becomes coral crab habitat. The island has a very beautiful beach panorama. Rows of steep rocks complete the charm of this place. Here, the location is great for snorkeling and diving. Not surprisingly, the island Kadidiri became the most attention of the tourists. About 16 km to the northeast of the island Kadidiri, stored evidence the history of World War II. Here, there is wreckage B 24 bombers owned allies. Until now, the wreckage is still intact. Lots of fish and coral reefs grow in this plane wreckage. 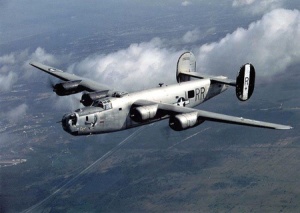 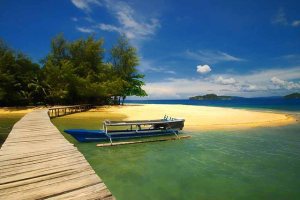 Batudaka Island is the largest island in the Islands Togean. The island is also the most easily accessible. On this island, there is a village called Bomba which is a residential area. So, in this place, tourists can get closer with Togean community life. In this area there is also a mangrove forest with panoramic truly alluring, with a very calm atmosphere. Here you can visit the village of Bomba for swimming, snorkeling, or visit the Bat Cave. 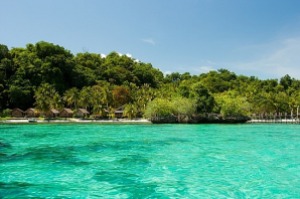 This is a paradise for lovers of the sport of diving. The island has a view of the underwater world that is very beautiful. Even more devastating is within five meters of the coastline, beaches on the island Taipi already overgrown reefs that create alluring scenery. So, no need to dive to enjoy the beauty of coral reefs. The distance between the islands Taipi with Kadidiri is about 4 Kilometers. 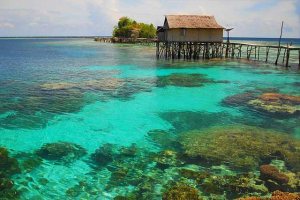 The island is inhabited by Bajo. So, in this place, tourists are offered exotica settlement Bajo. Bajo is a legendary sea tribe. This tribe is very well known as reliable sailors. Residents Bajo even build their village juts into the sea. 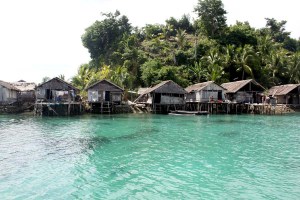 Kundurang is sea fish fishing locations are located in the middle of the sea. Degradation of water colors makes this place truly charming. Corals in this place are amazing. Very beautiful and can be seen from the boat because the water is very clear.

How to get there?

Alternative routes are shorter, are: Jakarta-Luwuk-Ampana-Togean. In Luwuk there are airports and also serves flights from Surabaya and Makassar (Ujung Pandang). From Luwuk to Ampana closer approximately 4-5 hours by road.. Arriving in Ampana, you can directly come to the Office of the National Park Togean, at Poros Uemalingku Atas Rd, District Ampana kota. Here you can inquire about information Togean Islands National Park.

Lying 2° south of the equator, you’ll find the temperature here in the Togeans is a constant 30°C all year round.

Rainy season runs from December to March, but being in the tropics, the rain is only intermittent rather than torrential. Likewise dry season isn’t absolutely dry either! August is the windiest month. High Season revolves around European summer holidays in July and August.

We recommend you visit from May to December and, if you do plan on being here in July and August, just remember that accommodation is very limited so book as soon as you can.

Things to do in Togean Islands

This entry was posted in Vacation Places and tagged Togean Islands, traveling to indonesia, visit to indonesia. Bookmark the permalink.